So I have been extremely busy of late with a number of things, some of which I'm not allowed to talk about, others of which I will be discussing here. But fear not, I have been paying attention to Livejournal and keeping up with people's posts.

First things first, I have a book! It is titled Blood In The Skies and it is the first novel in The Hellfire Chronicles. Observe!

You all have probably noticed that I don't post here on Livejournal very much. Let me assure you all that I still do read Livejournal every day and I enjoy keeping up with everything going on with all you lovely people. However, if you are interested in following my thoughts, writing and ramblings, you will find all of that on my Facebook, my Twitter, and at Tor.com where I am a blogger.

So don't worry everyone, I'm still paying attention to all of you who use Livejournal, I just don't have the time necessary to keep it updated right now with all the projects I'm working on.

I and Zoh became jet riders. 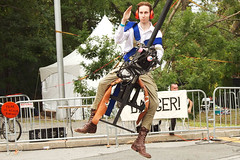 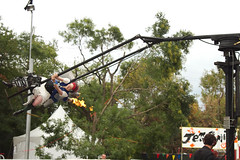 And video of the ride:


The long video of the ride and Zoh's wonderful dress that she had to take off in order to ride:

*NOTE: There are a lot of strange sounds that occur during this video. These are the actual sounds of the jet ponies or other machinery active in the area, and not the result of the video's sound quality. If it was the sound quality, it would have been fixed already.*

I just finished reading David Fromkin's A Peace to End All Peace, which examines the breakup of the Ottoman Empire after the First World War, and discusses how the Allies' messy handling of the process (primarily focused on turning the region into a collection of protectorates) helped form the Middle East that we see today. It's a very good read, although at 567 pages it definitely demands a certain time commitment. Fromkin does a fine job making the narrative engaging and easy to follow, which is an impressive accomplishment considering the great complexity of the topic.

The book has really inspired me with a lot of great questions and ideas, but there's one in particular that I'd like to share with you all. In his conclusion, Fromkin points out that the Allies (especially the British) were trying to transform the post-Ottoman Middle East into a collection of nation states along the lines of Europe. But they expected to be able to accomplish this in a matter of years rather than decades, let alone centuries. And yet, post-Roman Europe (which found itself in essentially the same position of being a collection of diverse peoples suddenly without the imperial entity that had dominated them for centuries) took well over a thousand years to complete that process. It took centuries for the post-Roman Europeans to create national identities for themselves and it took more centuries for them to determine which nations would occupy what geographic territory. Over those centuries, the development of post-imperial Europe saw tremendous amounts of internal violence and warfare, exercised by the young nations both against each other and against their own people.

What struck me is how this parallels the post-colonial world of today. With the breakup of the European empires over the course of the 20th century, it seems like the new nations in Asia, Africa and the Pacific are going through a similar struggle to define themselves as free political entities. I think it's safe to say that the model of the nation-state has already been accepted by most of the world, but that still leaves the struggle to define one's geographic boundaries without and ethno-cultural boundaries within. We can see countless examples of this in various conflicts between or within nations, such as the dispute over Kashmir between India and Pakistan or the ethnic violence in Rwanda. If the post-Roman example in Europe is anything to go by, post-imperial struggles are inevitably long and violent, and result in the repression or even annihilation of minority cultures within a new nation. And these disputes over identity can be over sacred or secular issues with equal ease: let us not forget the example of France, with the massacre of the Albigensians and the persecution of the Huguenots (religious), and the repression of minority cultures like the Basques, the Bretons and the Alsatians (secular). This does not paint a hopeful picture for post-colonial world, and certainly no one wants new nations, finally enjoying freedom and self-determination, to go through centuries of violence trying to forge themselves.

So what does this mean? Is this parallel simply a coincidence? Will we see the post-colonial world escape the worst of the European national experience? Or are all nations destined to go through some amount of terrible and intolerable violence? I don't have an answer, but I'm curious as to what all of you think about this.